In this example, we're going to explore travel times to hospitals within Leeds, England. By connecting census data, we can understand how many people with long term health conditions are able to travel to these hospitals within 30 minutes by walking.

First, we're going to import a dataset generated by querying OpenStreetMap data. Using the Overpass Turbo tool, we create a wizard with the term:

After running the resulting query, we export the data as a GeoJSON file. We can then import this data from the layers panel by clicking the import dataset layer button.

2. Creating an isochrone location by query

Change the following settings from their defaults:

3. Creating an isochrone query based on census data

Next, we source a census-based dataset of people with long-term health conditions in the Leeds area. You can download and use the same zipped GeoJSON dataset here, then upload it in the same way as the hospital dataset above.

Going back to the Isochrone controls, click the Queries tab, then click the add button to create a new isochrone query:

This brings up the Isochrone Query Editor: 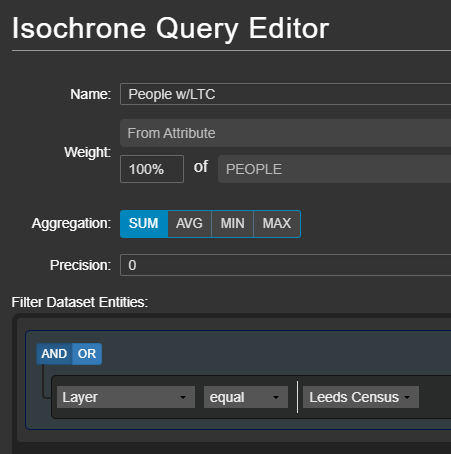 To translate the above, this means that we are taking all entities on the "Leeds Census" layer, and summing 100% of the "PEOPLE" attribute for each entity (or fraction of an entity) which falls within the isochrone time bands.

Once the isochrone query is configured, click Recalculate to see the effects of this query. 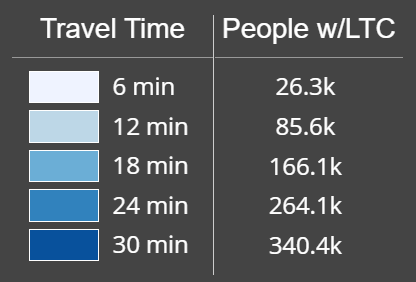 Podaris now automatically calculates the number of people who can reach our hospitals within a range of travel times (set according to the step size and steps that you specified in the isochrone settings earlier).

5. Understanding the effects of transport networks

So far, the isochrone access times are just for walking, since no public transport networks have been added to the project.

While it's always possible to model public transport networks from scratch within Podaris, in this case we are going to add a GTFS feed of the Leeds area.

On the services panel, click the Import button and upload your file.

We can now see the network on our map.