How are isochrone queries calculated?

Use isochrone results to quickly aggregate geospatial datasets, to do things like estimate the population served by your transport network plans

What are isochrone queries?

Isochrone queries are a powerful feature of Podaris, which allow you to perform advanced geospatial analysis on the areas serviced by your networks by generating queries related to your data layers.

Isochrone queries can help you understand how travel-time and catchment in your networks relate to the distribution of entities within a dataset. This feature can help you answer questions such as:

How do the queries work?

When you create an isochrone, you are creating a set of areas that visualise the area accessible for a given type of catchment or connectivity. Queries allow you to aggregate underlying datasets through a technique called geospatial estimation.

The principal behind geospatial estimation is considering the intersection of the isochrone area with your selected underlying datasets.

For underlying datasets which contain points, this is simply a task of then checking if the point is within the area of each isochrone step.

As an example, when calculating the number of post offices (

) within a 5-minute walk, Podaris will count the number inside the 5-minute walk area of the isochrone. In this instance, the answer is 1, because one post office is inside the area, and the other two are not counted because they are outside of it. 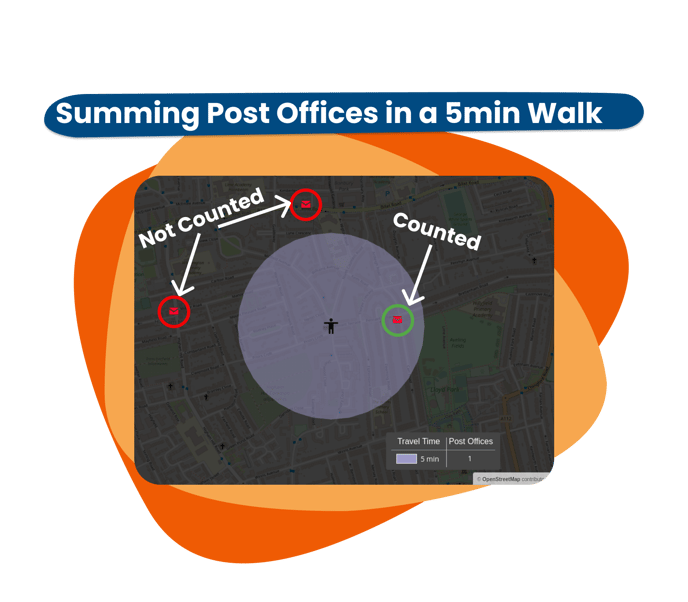 When it comes to polygon features on datasets, Podaris considers the proportion of entity within the area of the polygon and then aggregates the percentage of that value.

Podaris is designed for rapid quick-response planning, so to balance the needs of speed vs. accuracy, the proportion of polygon features within an isochrone is estimated rather than calculated exactly. The geometric precision used for this estimate varies depending on the scale and density of both the isochrone and the number of polygons. A range for the precision can be found in the isochrone legend, and the tolerance can be overridden as part of the isochrone query settings.

The automatic precision is calculated as follows, where the area is the sum total of either the isochrone or the polygons it intersects, whichever is larger:

LinesStrings (or Lines) are calculated very similar to polygons, with the difference that their proportion is based on the length of the line within the isochrone area, rather than the proportion of the area.