GTFS feeds come in all shapes and sizes. The Podaris GTFS importer tries to be as flexible and unopinionated as possible, extracting as much useful information from the feed even if certain parts are invalid.

Existing transport networks can be imported from a range of industry formats including GTFS, TransXchange (TXC) and NetEX. To import a new network, select the "import" button from the services panel:

Imported files must be provided in the .ZIP format and have a maximum size limit. You may wish to consider removing unneeded trips or unused routes from your feed to reduce its size if you meet this limit.

Podaris converts all imported files to a GTFS feed, meaning that you may use Podaris to import a TCX file before exporting it to GTFS, for example.

The default options are designed to import a feed in a way where it provides accurate routing for journey planning and isochrones. If you are importing a feed to analyse attributes like fleet size or to modify routes, you may wish to modify the import options below. 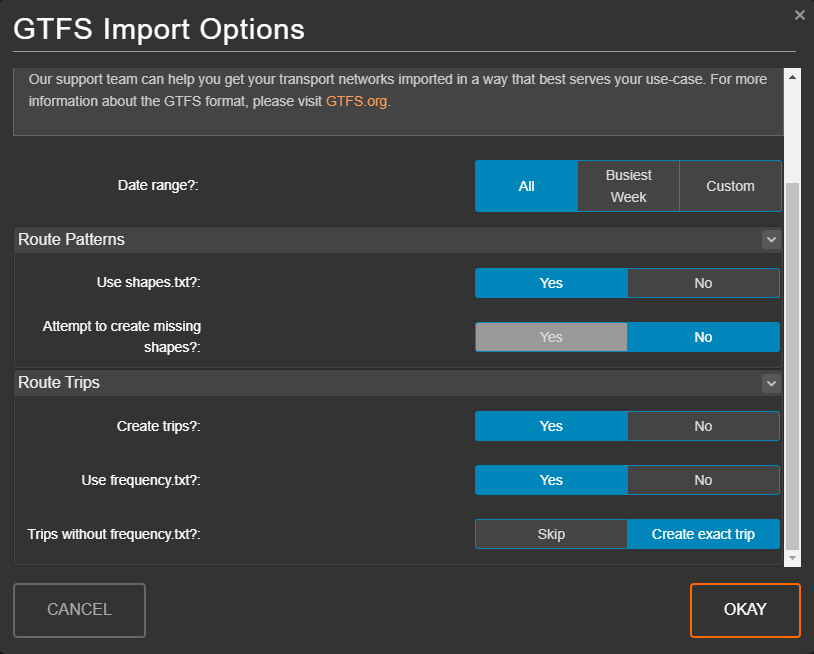 GTFS feeds can be exported in Podaris:Plan from the Export Project menu, selecting the GTFS tab. 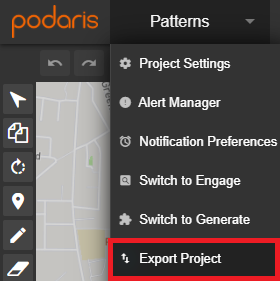 This will export all currently visible transport routes and stations. Note that visibility can be toggled with the

button (shown below for routes).

The export GTFS window gives you options to Use Podaris IDs. This will override any agency, stop, and route IDs set throughout Podaris, replacing them with our internal IDs, which are guaranteed to be unique.

The Include parent stops even if hidden option allows you to choose to include hidden parent stations in your outputted GTFS feed.

Our support team can help you get your transport networks imported in a way that best serves your use-case. For more information about the GTFS format, please visit GTFS.org.